What Are the Fairy Doors of Ann Arbor? 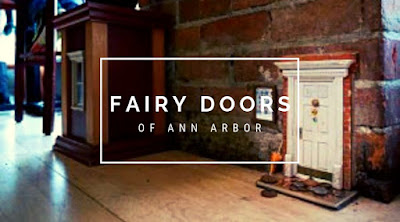 You may have seen them if you’ve ever visited Ann Arbor before. They’re hard to notice at first, but look down and there they are: tiny doors built into buildings or homes, large enough only to fit a mouse or, if you’re well-versed in folklore, a fairy. The doors have a curious history in Ann Arbor, and there have even been parodies and copycats that have followed since they were first installed. But this all adds to the quirky charm that’s so characteristic of this city, and it’s why the fairy doors are so beloved.

The History of Fairy Doors in Ann Arbor

The first fairy door of Ann Arbor was “discovered” in 1993, in the home of graphic design teacher and University of Michigan alum, Jonathan B. Wright. Several others were found in his home over the years, and some were even said to disappear. Soon, fairy doors began to appear throughout Ann Arbor. Wright created a website, “Urban Fairies” in which he provides a map for tourists of the places where he’s discovered public fairy doors. Tourists will sometimes leave trinkets beside the fairy doors, such as small toys or flowers.

Though it’s commonly known that Wright is the artist behind the fairy doors, he prefers to refer to himself as a “fairyologist” who’s discovered fairy doors throughout the city. In doing so, though, he created quite a trend that now other cities have begun to mimic. There’s some debate over whether or not Wright created the concept of fairy doors originally, but here in Ann Arbor, locals will tell you that his were the first. Wright has also written a book about the phenomenon, entitled Who’s Behind the Fairy Doors?

Where to Find the Fairy Doors

There were once ten public fairy doors but, in keeping with the mysterious nature of them, some have disappeared over time. There are still some fairy doors, however, that you can find walking through the city, especially using Wright’s tour map.

At least two subsequent fairy doors have also opened in Sweetwater’s. You can also find a small, grey goblin door in downtown Ann Arbor, which displays the tombstone of a fairy beside the entrance.

The question is where to stay while exploring this local phenomenon, and the answer is the Unviersity Inn of Ann Arbor. Unlike fairy doors, we’re easy to find, at the intersection of Washtenaw Avenue and Stadium. We also offer 10% discounts to families and students visiting University of Michigan, or parents of athletes for either UM or Eastern Michigan University. Contact us today to book your stay.

Article Source: What Are the Fairy Doors of Ann Arbor?

Posted by The University Inn Ann Arbor at 6:10 AM