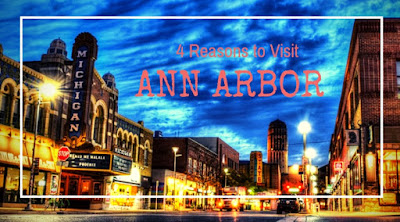 Not every vacation needs to hit the east or west coast. Ann Arbor can be a delightful destination for visitors looking for charm, culture, sports, and great food. In fact, in 2017, Ann Arbor ranked as #16 on National Geographic’s 25 Happiest Cities. Ann Arbor has attractions to please all sorts, no matter your age or your interests. Your reason for visiting Ann Arbor is totally up to you, but here are a few of our favorite reasons.

If you’re a fan of college sports, especially football, Ann Arbor should be one of your top travel destinations. University of Michigan is a founding member of the Big Ten Conference, and the University of Michigan football team, the Wolverines, plays in the “Big House,” the largest football stadium in the United States. In fact, so large is the Big House that it can fit nearly the entire population of Ann Arbor. Ann Arbor is also the base for Eastern Michigan University, home of the Eagles.

It’s also worth noting that when parents of UM or EMU athletes stay at University Inn, we offer a 10% discount.

It’s hard to describe Zingerman’s but if you’ve been to Michigan before, there’s a chance you’ve heard of it. When it first opened in Ann Arbor in 1982, Zingerman’s was a deli. In the 37 years since, it’s grown into something more...a foodie behemoth with a corner in all different areas of food. There’s Zingerman’s Bakehouse, Zingerman’s Roadhouse, Zingerman’s Creamery, Zingerman’s Coffee Co, Zingerman’s Candy Manufactory, even a catering location and mail order website. It goes even beyond food, with ZingTrain, a training center for building business leadership skills. But it all started in Ann Arbor, and you can find the Delicatessen as well as the new locations here still.

Microbreweries have been gaining momentum in popularity over the past few years, and Michigan on the whole is home to about 150 of them. However, some of the darlings of Michigan’s microbrewery scene can be found here in Ann Arbor. Arbor Brewing Company is the most well-known, and it’s wings have even spread as far as India, thanks to a former University of Michigan alum. For a quirkier brewery, there’s Jolly Pumpkin Cafe and Brewery, known not just for its great beer but its delicious truffle fries.

Every June in downtown Ann Arbor, tourists and locals can enjoy the Cinetopia Film Festival, showcasing over 50 of the best feature-length dramas, comedies, and documentaries from some of the most widely respected film festivals. These include festivals like Sundance, Cannes, Tribecca, SXSW, and many more. Cinetopia also includes special programs, such as their Detroit Voices Short Film program, the Ann Arbor Jewish Film Festival, or the Arab Film Festival.

Need another reason to visit Ann Arbor? When you book a room with University Inn as a parent or student in order to visit the University of Michigan, University Inn will offer you a 10% discount. Contact us today for more information or to book your stay.

Article Souce: 4 Reasons to Visit Ann Arbor
Posted by The University Inn Ann Arbor at 5:46 AM